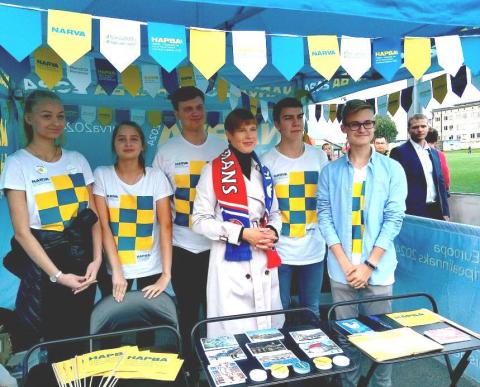 The poll by Norstat found that 75% of respondents in Ida- and Lääne-Virumaa counties know of and 85% support the bid of Narva and Virumaa region for the European Capital of Culture 2024 title. 500 people in both counties in the North East of Estonia were polled in August.

Mayor of Narva, Tarmo Tammiste is pleased with the results: “The poll shows that people in Narva and Virumaa are behind our ambitious plan to bid for the title of European Capital of Culture and recognize the great potential it offers for the future of the whole region.”

Middle-aged (73%) and older (84%) people are most aware of the idea of Narva 2024, young respondents below 25 are the least informed (62%). Estonian speakers have learned about the ECoC bid mostly from TV (66%), Russian speakers from the Internet (47%), other ethnic backgrounds from the radio. Younger people have received the information mostly from online and social media, older people from TV, radio and print media.

85% of the 500 people questioned support Narva’s candidacy for the European Capital of Culture, at 89% the support is even higher among Russian speakers than Estonian speakers with 80%. The support is highest among middle-aged and older people (89%), whereas only 62% of people below 25 support the idea – the same number as awareness.

As the main reasons for their support people pointed out that the title would help to connect Narva better with Estonia and Europe and make the town more European. Narva as a multicultural European border town would be worth the title and bring more visibility to Estonia.

The poll of 500 people was conducted by Norstat and the respondents were selected to represent the population by gender, ethnic background and age in both counties – Ida-Virumaa and Lääne-Virumaa.

Narva will present the preliminary bid to the Ministry of Culture on 1stOctober. Estonian government has decided to match the funding of the local municipalities and other sources up to 10 million Euros.